Pantheon of Rome: history and facts

The Pantheon of Rome is certainly one of the most fascinating historical buildings in Rome. It is located in Campo Marzio, one of the most iconic neighborhoods of the Eternal city, where you can experience the authentic Roman atmosphere.
Where Ancient Rome is fused with the bustle of everyday life.

The square, Piazza della Rotonda, in front of the Pantheon is always busy, with people from all over the world. Shops and restaurants surround it today, and you can enjoy a cup of cappuccino while wondering about ancient times and how extraordinary is the fact that a building so ancient, so spiritually relevant, so fascinating in its structure, perfectly coexists with modernization and has survived the centuries.

When you are in Rome, make a very special stop to visit the Pantheon. In June, during the Pentecost, during the Summer Solstice, or any other time of the year, this is one of the finest examples of Roman times you cannot miss.

This historical construction was first founded by Agrippa (Friend and Son in law of the First Roman Emperor, Augustus), around the 27th Century Bc. in honor of a mother Goddess Cybele and all the Gods.

The inscription on the façade narrates “Marcus Agrippa, L.F. (Lucii filius) COS. (consul) tertium fecit” Literally translates to “Marcus Agrippa, son of Lucius, has commissioned it when he was consulate for the third time”.

A signature, if you will. To highlight his properties in the monumentalization of the Neighborhood, Campus Martius.

In fact, the Pantheon of Rome was part of a 3 dislocated building complex:

The Pantheon and the Basilica of Neptune were called “Sacra Privata”, private buildings used for sacred adoration. One may assume, given the original inscription, that the building is the original construction; when in fact, archeological excavations have proven that Agrippa’s Original structure was rebuilt under a different Emperor, Hadrian, several years later, because it was actually destroyed not once, but twice by 2 fiery fires in different moments in time.

Interesting facts about the Pantheon of Rome 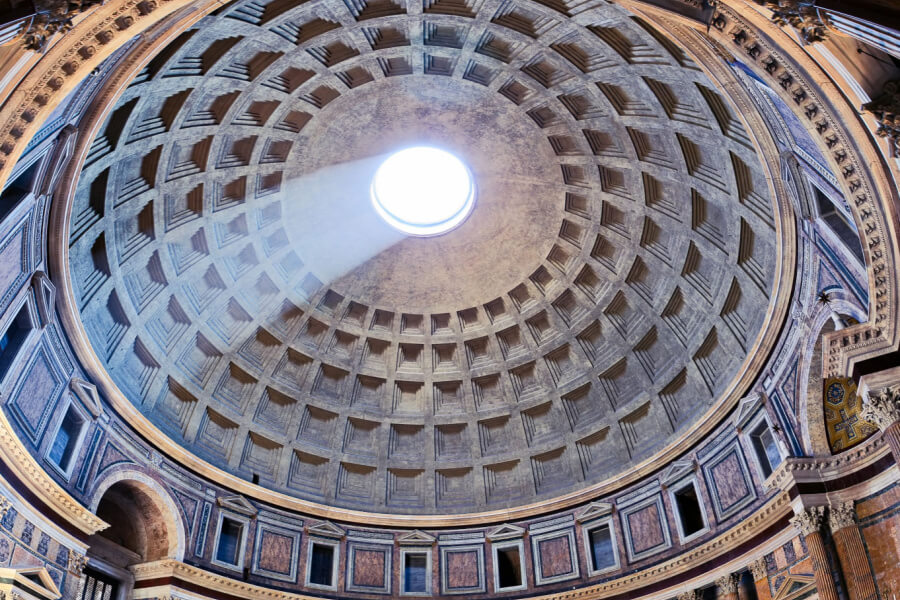 Pantheon oculus – “the big eye”
For Centuries, especially in Renaissance times, the Pantheon has been a marvel to so many, for its peculiar spherical shape. Entering the Pantheon for the first time, will leave you speechless. The sphere becomes a dome, with an enormous circular skyline in the middle.
That is called the Oculus, the big eye.

The only window that allows light and heat to penetrate. The interesting fact about the oculus is that it’s created for an even more fascinating reason: A “solar watch”.
From its skyline, a ray of sunlight enters the Pantheon every day, and it rotates inside, depending on the hour. Meticulous infrastructural calculations have created an incredible astrological phenomenon: At noon during the summer solstice a ray of light pushes through the big eye in the dome, projecting a disk of pure sunshine on the entire floors, 43 meters below, of the same diameter as the oculus.

So not only this building is an architectural digest, it’s also an astrological observatory. An observatory dedicated to all the Gods, hence the name. With the end of Roman Times, and the Beginning of the first Imperialistic Christian Sovereigns, the Pantheon was abandoned for several years.

A tradition that takes place during the feast of Pentecost in June, to which a Mass is dedicated. After the Mass, traditionally thousands of Rose Petals are released into the Pantheon, through the Oculus, creating a moving, romantic and profound moment. Symbolizing the descent of the Holy Spirit on Earth. Imagine standing underneath the big eye in the dome of the Pantheon, while Red rose petals fluster all around you, from 43 meters in the air. Only in Rome, will you find something so magical.

The tombs of the Pantheon of Rome
The Pantheon is one of the most beautiful Basilicas in the World. It also hosts the tombs of some of the most well renowned and important figures in the history of Italy, such as royal members of the Savoia family, and several artists, like Raffaello Sanzio.

It certainly remains a place, filled with mysteries to discover.

Pantheon’s undergrounds
Like the Pantheon’s undergrounds, only recently reopen after a massive restoration. The secret Pantheon, lies 7 meters below the surface. A trip that begins with the so called Devil’s dungeon. A heavy bronze door opens to a different level in time: The rooms dedicated to the Basilica of Neptune have been en-globed with the most recent rebuilding of the Pantheon. More like underneath it. The marble floors and decorations that follow an oceanic pattern, with dolphins floating away between the God’s Trident.

Who knows for how long the Pantheon will stand for. It will certainly outlive us all. As many Ancient Roman Architects, this building is everlasting.

Your personal tour driver will welcome you at your dock in Civitavecchia. Today, you’ll learn all about the Colosseum, the Roman Forum, Piazza Venezia, Mussolini’s balcony, the Capitoline hill, the Palatine hill, the Circus Maximus, the Trevi Fountain, Pantheon, and the Spanish Steps. Drive by all the major locations such as the Via Veneto, the Castle of St. Angelo, the Marble Foot and Cat Street (Roman Curiosity), Trajan’s Column, The Maps of the Empire, Arch of Constantine, Marcus Aurelius’s Column, Parliament and Council of Ministers, St. Nicholas in Chains, temples of Apollo, Vesta and Janus. Very interesting, unique venues. Your driver will be happy to recommend one of the best, local restaurants for a typical Italian treat. Not too touristy, to blend in with the locals and have a scrumptious meal. Finally, you will drive to the Vatican City and stop at St. Peter’s Basilica, the largest church in the World. Michelangelo’s “Pieta”, the beautiful Bernini Pulpit, and other fascinating details that will leave you in awe! After such a special day, you will return to Civitavecchia Port

The Highlights of Rome on this excursion from Civitavecchia Port! Your English tour driver will welcome you at your dock in Civitavecchia Port. As you get closer to the City, he will give you all the interesting information on the City while you’ll notice the presence of more and more historical sites as the Pyramid of Caius Cestius, the Circus Maximus, and the Palatine Hill. Once in Rome you’ll explore sites such as the Colosseum (if you’d like to visit the Colosseum on the inside, we can arrange that! Book entrance tickets through us for an additional cost, upon request), the Capitoline Hill, the Amazing Pantheòn and of course, the Trevi Fountain. Toss a coin over your shoulder and into the fountain. Make a wish for good luck! For lunch, why not stop in a local place in one of the best quaint, romantic neighborhoods there are like Trastevere, or Campo de Fiori. Last but not least, you’ll visit Saint Peter’s Basilica! One of the Holiest places on Earth! Admire its High Renaissance and baroque architecture. With its greatness of art and golden details, marble and mosaics, the atmosphere is overwhelming. Be sure not to miss Michelangelo’s Pieta, completed when the master was only in his 20s. After the tour, your tour driver will escort you back to your cruise ship.

For this Ancient Rome tour, your personal tour driver will pick you up at the pier of your Cruise ship in Civitavecchia. You’ll enjoy an exclusive guided tour of the Colosseum, to learn all about the Ancient Romans history, traditions and customs, walking through the arches and columns. Next, the Roman Forum. The first Roman civilization began here. Legendary for its contribution in politics and Christianity’s evolution, it became the commercial center of ancient Rome. This tour also features other sites of ancient Rome! Such as the Arch of Constantine and Piazza Del Campidoglio, designed by Michelangelo. After your morning guided tour, your driver will be happy to recommend one of the best, typical Roman restaurants or “Trattorias” in the area. You will then reach the beautiful Pantheòn, the most well-preserved and influential building of ancient Rome! Last but not least, you will drive to the ancient Appian Way where you will have the chance to stop and visit one of the famous Catacombs located in the area. These catacombs are so fascinating, you will really find their story are intriguing, In some areas of Underground Rome, you will find miles-long tunnels in Catacombs that are even 4 stories-deep. After such an exciting experience in the depths of Rome, you will return to Civitavecchia Port.