7 curious facts about the Colosseum

Colosseum of Rome: one of the World’s 7 Wonders

One of the 7 Wonders of the World since 2007, the Colosseum is the unequivocal symbol of the Imperialistic Rome.
It was built under Emperor Vespasian between 72 and 83 a.D. as his gift to the people of Rome.
We are talking about a gigantic building at the time

Its original name is “Amphitheater Flavio”, because it was built by the Flavia Dynasty.
Located where Nero’s private residence, the Domus Aurea, used to be. A monumental residence, that spread from the Palatine Hill all the way to the Esquiline Hill. In one of the “small” halls of the Domus Aurea once was the famous Colossus of Nero. An imposing 38 meters-tall Bronze statue, to highlight and amplify the “magnitude” or the ego of its owner, some might say. No one knows exactly for how long the statue was standing, or for how long, some say until the 4th and the 7th Century a.D. And there are so many legends involving its disappearance, because the statue at some point in time, has vanished.

But how can you simply move a statue that big without making a fuss?
Some say that a devastating earthquake broke her down, others say that it was stolen during the famous sack of Rome, but who knows.
Because of its enormous proportions and because it used to stand tall in front of the Amphitheather, even though the Statue is nowhere to be found today, the term Colosseum is officially coined by the people of Rome. A tribute to that tall-standing representation of Imperial Rome: Even though, the original name is Anfiteatro Flavio, it will always be the Colosseum to the Romans.

What was the Colosseum used for? 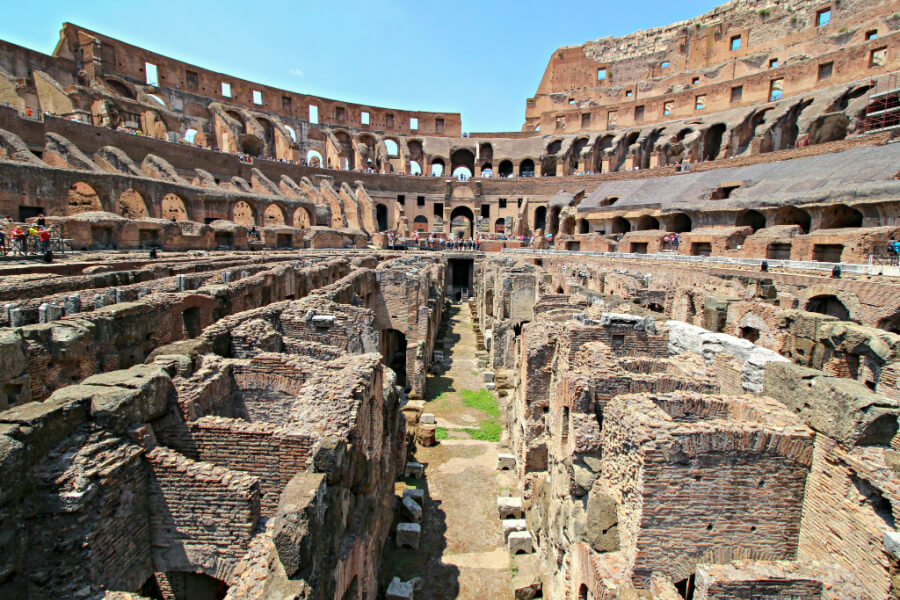 The Colosseum was built for entertainment, primarily. For all sorts of gory games.

Try to imagine, Emperor Titus, back in the 81st Century a.D., rise from the bastions, to announce the first Games that would last a hundred days, in front of a swarm of men, gathered by the thousands in a festive crowd (the Colosseum could host up to 50 thousand spectators!)
And games that came for centuries to come, of hunting, battle reenactments, fights, adapting to satisfy new requests and styles, changing in time, including Gladiator fights.

But not everybody could enter the amphitheater. To see the games you had to own a sort of membership card, made of different materials including bronze and copper, that had inscribed the number of the entrance arch the member had access to. With the beginning of Christianity, the Gladiator games were not so requested by the spectators anymore, so they were gradually replaced with hunting scenes, and the last Gladiator fight in the history of the Colosseum took place in 523 aD.

7 curious facts about the Colosseum

At the end of its glorious era, the Colosseum shut down and was abandoned. But it was later repurposed as quarry, from which was extracted the materials used to built some important buildings in the city of Rome. Including Saint Peter’s Basilica, possibly the most important of all.

In Gladiator times, the Colosseum earned an unfathomable and horrific fame: aside from the thousands of deaths, this place also hosted gory rituals and its said that witches and sorcerers used to pick wild herbs there, that grew inside the amphitheater, in the 1500s.
Thousands of years of history, shaped in a caldron of so many creeds, traditions, engineering, cultural facts and customs.

But as we know, its fame becomes Worldwide possibly thanks to the dozen of movies, featuring Ancient Roman times. Including the most recent: Ridley Scott’s, Oscar winning film, the Gladiator. With actor Russell Crowe. Who’s devotion to Rome is palpable through his lead in this movie, filmed 22 years ago, but also through his visits, every so often, in the Eternal city. Only recently this summer, did he jokingly Tweet a picture of him and his family at the feet of the Colosseum, saying “Taking the kids to see my old office“. And earlier this month he was nominated Ambassador of Rome in the World, by the mayor of Rome. Of course, who better than Massimo Decimo Meridio to fit the role of Rome’s Ambassador in the World? But he is not the only one to be bewitched by the power of the Eternal city and its buildings.

The Colosseum is a symbol and evocative testimony. A prolonged connection of Rome and its people, with the past. An extension, to this day, of a majestic, crafty and powerful lot of human beings. No wonder it attracts thousands of visitors each year: there is nothing like it.

We are pleased to offer you the once in a lifetime opportunity to visit the most important historical sites in the World. The Colosseum. Everything will be take care of for you. All you have to do is get ready to enjoy this amazing Exclusive Colosseum tour! Exclusive Private Tour of the Colosseum, Entrance fees included Your highly expertise guide will guide you around and into the Colosseum in the most interesting and entertaining way! The Colosseum is certainly one of the most important monuments of ancient Rome. You will learn about the gladiators, the emperors, and society that attended to the gruesome spectacles, that this amphitheater hosted. Here, over 50,000 people gathered to watch gory gladiator contests. Your guide will then lead you into the Roman forum, known as the heart of the ancient city and Roman Empire. The first Roman civilization began here. Legendary for its contribution in Christianity’s evolution, it became the administrative and commercial center of ancient Rome. Last but not least, the Palatine Hill! The Palatine Hill is located in the heart of the Seven Hills of Rome. It is one of the most ancient parts of the city and has been called “the first core of the Roman Empire.” It overlooks on the Roman Forum, on one side and the Circus Maximus on the other.

Your English speaking tour driver will welcome you at your hotel or any other place of your preference. Enjoy a full day tour in Rome and the Vatican City with your private luxury vehicle. You will visit the most famous locations in Rome! Like Piazza Venezia, monument of Victor Emmanuel II and Mussolini’s Balcony, the Capitoline Hill, (one of Rome’s seven hills) with amazing view over the Roman Forum. A stop to see the Great Colosseum up-close is definitely a must! You will then visit other sites like Roman Forum, Circus Maximus, Spanish steps, Trevi’s fountain (remember to throw a coin inside!!!), the Pantheon, and many Others. After this morning tour, your private tour driver will be happy to suggest some local restaurants for a delicious Roman meal. Finally, you driver will take you at the Vatican Museums where you will continue the tour with your very own private guide, from the Vatican! You will enjoy a private guided tour of the Vatican and Sistine Chapel. The visit at the Vatican Museum, Sistine Chapel, and St. Peter’s Basilica will be conducted by a English-speaking guide from the Vatican City, who will show you the best parts on your way to the Sistine Chapel. Including the Cortile Della Pigna, Belvedere, Pio Clementino Museum, the Gallery of Candelabra, the Gallery of Tapestries, the Gallery of Maps, and Raphael’s Rooms. Next, you will visit the beautiful Sistine Chapel. After, you will visit St. Peter’s Basilica, “the greatest of all churches” There you’ll have the chance to see some amazing masterpieces. After the tour, you will be reunited with your tour driver, who will take you back to your Hotel location in Rome.

Your English speaking tour driver will welcome you at your hotel or any other place of your convenience for this private Rome full day tour. Start your Rome full day tour with a visit to 19th century Piazza Venezia. Where you’ll see Vittorio Emanuele II monument, also known as the “the wedding cake”, because of its distinctive shape. Capitol Hill and Roman Forum are perfect, to enjoy the breath taking scenery of Rome. And the magnificent Piazza Del Campidoglio, commissioned by Pope Paul III IS A MUST SEE. Not very far away from here, there is the Jewish ghetto where you can explore the interesting history of the Jewish community in Rome. After visiting so many wonderful locations, you will finally arrive at Piazza Navona. The most extravagant of Rome’s Square, adorned with the fountain of The Four Rivers by Bernini, and the church of his rival, Borromini. Visit Piazza Della Rotonda, where you can see the Pantheon, the best preserved and enchanting monument of ancient times. You’ll continue with a stop in the Aventine Hill, for a picture-perfect view of the Eternal City. Next Circus Maximus, where chariot races were performed in imperial Rome, as we can see in one of the classic American movies, Ben Hur. Then off to the Coliseum, could contain 50,000 spectators to watch fights between beast and men, gladiatorial contests, races, and naval battles. Have lunch time in a typical Italian restaurant on the Appian Way. You can enjoy specialties of the Roman cuisine far away from the tourist-beaten locations. At the end of tour, will you take you to is the Catacombs. *Upon request, a local official guide can be provided for this tour. The price of the guide will be determined based on your specific interests and needs.

Your driver and one of our official expertise guide will meet you at your hotel or any other place in Rome at any time of your convenience, for your private tour of Imperial Rome. You will pass through the gladiators barracks, and arrive at the most known monument in the world, the Coliseum. Here, you can stroll through the path of the victorious legions, up to Via Sacra, and into the commercial, religious, and political center in the Ancient city, The Roman Forum. The last stop is at the top of Capitol Hill where you can look at the ruins of the empire, before reaching the wonderful Piazza Del Campidoglio, planned by Michelangelo during the Renaissance to be the center of political powers. Take this private tour, for a time traveling experience in the Highlights of this Ancient Imperial civilization. An amazing private tour in Ancient Rome. This itinerary is designed to offer the best way to see and understand the ancient monuments of Rome: how they were built, how they were used between stories and also facts that will enrich the visit.